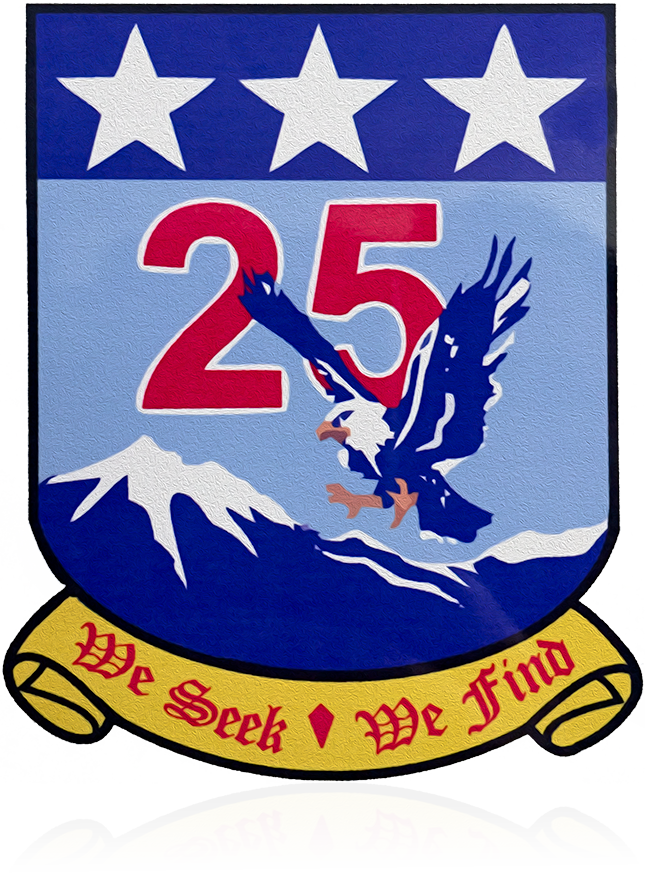 The motto of our squadron has a deeper meaning than the obvious emergency services connotations. It speaks of our quest to find able and willing professional volunteers to perform our three missions, Aerospace Education, Cadet Programs and Emergency Services. As a composite squadron, we are dedicated to providing the young men and women who join as cadets with the environment and structure to grow and develop into responsible, self-reliant and productive future leaders of our country. We do all of this promoting and living CAP’s core values, Integrity, Volunteer Service, Excellence and Respect.

C/Amn De Leon (on the left) making Squadron 25 proud at the Ultimate Bear & Wings Challenge. Thank you to all of our outstanding cadets and senior members who participated. ... See MoreSee Less

Squadron 25's new aerospace education officer, Denise Whelchel, has been an amazing asset to the squadron since joining us last year. This article on the national website highlights her background and accomplishments. Way to hit the ground running! ... See MoreSee Less

This past weekend, Cable Composite Squadron 25 hosted a Group 3 SAREX (search and rescue exercise). Multiple aircraft and UDF (urban direction finding) teams were deployed and conducted successful sorties. Despite delays due to inclement weather, the exercise was a resounding success and a great learning experience. Many qualifications were earned or renewed, and a good time was had by all. Thank you to everyone who participated and made this weekend the success that it was. ... See MoreSee Less

Following the past two weeks, C/CMSgt Ferrari led a model rocketry activity where cadets had to construct two different types of rockets: a rubber band powered model rocket & Alka-Seltzer powered rockets made from M&M canisters, tape, and paper! This is a step towards the cadets’ Model Rocketry badge which can be obtained through several tests, experimenting with these rockets, and building their own model rockets. ... See MoreSee Less

Tonight’s weekly squadron meeting was highlighted with a class led by Captain Carney and SM Whelchel, with a briefing of their flight bags and a tour of their planes. This included a checklist to be done before takeoff such as checking the fuel, inspecting the exterior of the plane, and also looking if the lights are functional. This class helped the cadets learn more about aerospace and flying, one of the main objectives in Civil Air Patrol. Many of Squadron 25 cadets are heavily invested with flying, so this was an amazing opportunity to get a brief overview and interactive experience into the world of aviation! ... See MoreSee Less

Congratulations to C/A1C Fung and C/Amn Villar-Mead on their promotions. These are the first few steps in a long, rewarding journey in Civil Air Patrol. Keep the momentum going! ... See MoreSee Less

Congratulations, very proud of your progress.

Today marked the end of the 2021 CAWG Summer Encampment, held at Camp San Luis Obispo, California. The Encampment trains cadets from ranks C/Amn to C/CMSgt (exceptions to this year due to COVID) with heavy emphasis on the cornerstones of Teamwork, Discipline, and Success. Cadets who graduate from this arduous event become better leaders in their community, school, and in life. Students of the Cadet Training Group (CTG) endure a week long session of drill and ceremonies, customs and courtesies, inspections, as well as classroom learning of character development, aerospace education, and orientation rides.

Teamwork: 5 inspections are included throughout the 7-day duration of Encampment. The main points of inspection are: attention to detail and teamwork. Cadets upon in-processing arrive as an individual, learn to work as a flight, establish an intensity in the squadron, and finally, become part of the Group.

Discipline: Defined as, “That mental attitude and state of training which renders obedience instinctive under all conditions. It is founded respect for and loyalty to properly constituted authority,” discipline is installed in all cadets of the CTG, which is stressed through the use of drill and ceremonies, character development classes, and during inspections, where military bearing is key to becoming an outstanding cadet.

Success: This third and final cornerstone of Encampment comes as a part of both Teamwork and Discipline. Success is represented from Cadets through their final group PT, group run, and group inspection. Passing all three of these events on Day 6 of Encampment grants them a guaranteed graduation and as a member of the CTG.

Congratulations to C/Amn Keightley and C/Amn Fung for graduating this Encampment!

Special thank you to C/CMSgt Schwind for directing mess staff and making sure everyone was fed!

Congratulations to all that attended in this years Encampment. Thank you to all that helped made this year a true success.

We had such a great night last night, the weather cooperated. We had an addition of two new prospective cadets join us, one wanting to join the Air Force Academy and the other undecided. Either way they will grow into amazing young leaders of America. The participated in physical activities, drill, leadership and we also had our safety meeting. I have three additional Senior members with me as well as several parents that stayed around. A very successful night indeed. Thank you to everyone that supports what we are doing with these youngsters. See you next Thursday night. Have a great Fourth of July weekend. ... See MoreSee Less

I would love it if everyone that follows this site shares this with all of your contacts. Civil Air Patrol is an amazing huge organization that does not get much publicity. We have a terrific Cadet program (AFROTC) that is similar to those that are held at some of our High schools, however as many of you know these school programs are disappearing every year, tragically. Our program is aimed at youths and adults starting at 12 YOA and older. Please share this information to anyone that you might consider being interested. I have seen such transformation in the young cadets that are at my Squadron as they grow into amazing adults. The youngsters do not need to be interested in joining the Armed Forces, they just need to be interested in becoming well rounded World Leaders. Please do not hesitate to reach out to me personally for more information. I have been with Civil Air Patrol, Upland Squadron located at Cable Airport since 2014. As most of you that know me, my son did AFROTC at the Academy of Excellence (AAE), for 4 years, as well as being a cadet with Civil Air Patrol, 2 years and received a full ride, Type 1, Scholorship to USC, where he is currently a senior obtaining his Aerospace Engineer education. His hopes are to receive a pilot slot to fly for the great United States Air Force. I look forward to responding to any questions or responses you may have. ... See MoreSee Less

Hi! Thanks for posting! My son is 14 and takes flying lessons at cable and he wants to join the Air Force. The goal was to join as the program came back from covid, but he was diagnosed with cancer last month. So hopefully he will be through all his treatments January and he would love to join then!